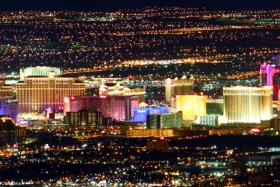 Las Vegas casinos closed in mid-March to help slow the spread of coronavirus. Many properties reopened on June 4. Visitation is slowly continuing to rise but Sin City isn’t back yet. The Las Vegas Convention and Visitors Authority recently released a report that shows that regional visitors are driving more to Las Vegas than previous months this year. The executive summary also shows that weekend hotel occupancy is 66% while weekdays are only 38.5%. While both are increases, the slow weekdays leave a lot to be desired for Las Vegas casino operators.

During its third-quarter earnings call a representative for MGM Resorts said that the company was preparing to close some hotels and/or hotel towers in November and December. This is typically a slow period for visitors that will be even slower than usual.

The NFR (National Finals Rodeo) has canceled its two-week event. The concerts and performances that usually draw people to casinos all over Las Vegas won’t be happening either. The holiday season will be a little slower too with fewer and smaller entertainment options. Even the New Year’s Eve fireworks on the Vegas Strip is canceled. Much like NFR earlier in the month, New Year’s Eve usually brings lots of entertainment and visitors to Las Vegas.

The announcement had a short news cycle as MGM Resorts announced its first property re-closing.

The main Park MGM hotel will be closed on Monday, Tuesday, and Wednesday. The casino, restaurants, and other amenities will remain open. Additionally, the NoMad Hotel will remain open entirely.

“While we do not currently expect the mid-week closures to remain in effect past December, we will continue evaluating business levels to determine how long Park MGM’s mid-week hotel closures remain in effect.”

During its earnings call prior to announcing the closure, MGM Resorts noted that Park MGM was the only cashflow negative property during the third quarter. The property wasn’t open the entire quarter so it’s difficult to say that business was poor due to being the only non-smoking casino on the Vegas Strip.

During the previous quarter, Mandalay Bay was the only MGM Resorts property that was cashflow negative. That property bounced back with a good quarter thanks to families visiting that wanted to enjoy Mandalay Bay Beach.

The closure of the hotel at Park MGM during the week follows some other properties on the Vegas Strip. Some casinos opened completely before scaling back operations. A couple of casinos on the Vegas Strip have only opened partially with no full-time opening on the schedule.

If you’re willing to travel to Las Vegas there are going to be great deals in November and December. The lack of events, cooler weather, and of course, coronavirus mean fewer people will be visiting.

That also means casinos will be ramping up the number of deals available. Check your favorite casino loyalty club for offers. Don’t forget the check the rest of Travel Vegas for deals. The sales are updated as soon as they come in.