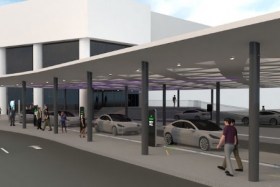 We tend to focus on leisure travel at Travel Vegas because that’s the fun part of Las Vegas. However, over 6 million people visit Las Vegas annually for conventions, trade shows, and meetings. Casino operators like MGM Resorts and Wynn Las Vegas aren’t the only companies expanding convention space.

The LVCVA recently began tunneling the future of transportation in Las Vegas. The Boring Company (TBC) owned by Elon Musk (Tesla, SpaceX, etc.) is now working on the LVCC underground people mover. This innovative method of transportation will be ready in early 2021 and will help convention attendees get around the 200-acre campus.

An underground people mover doesn’t sound innovative but in reality, it is. This is the first commercial endeavor for TBC and another first for Las Vegas. LVCC today is huge but walkable. The new expansion would make walking throughout the convention center a massively time-consuming task.

The $52.5 million underground people mover will include three passenger stations connecting the existing 3.2 million square feet of convention space with the LVCC’s new 1.4 million-square-foot West Hall currently under construction. The innovative transportation system will allow convention attendees to get around the LVCC’s 200-acre campus in just over one minute.

As you’d imagine, this will be a free service for convention-goers. The all-electric Tesla vehicles are capable of holding between 3 and 16 people. The system will be designed for ridership of at least 4,400 passengers per hour and is scalable depending on convention attendance.

When completed in January 2021, the underground people mover will be comprised of two tunnels with an expected total length of approximately one mile each. The new transportation system will have the potential in the future to expand and link key visitor attractions throughout Las Vegas, such as Downtown Las Vegas, Las Vegas Strip, McCarran International Airport, and more.

Even though the trips should be short, you can still work while hustling around the LVCC. The tunnels will have a cell phone and a WiFi system. If safety is a concern with the new system there will be ventilation and life safety systems, tunnel lighting, power and video surveillance systems.

A Few Words From Las Vegas and TBS

“This is truly a significant occasion for Las Vegas,” said Steve Hill, LVCVA CEO. “Our collaboration with The Boring Company continues to elevate the innovative experiences we offer our visitors and will ensure that our expanded convention facilities are among the most tech-forward in the world. We took the concept of utilizing the underground people mover from an idea on paper to tunneling in less than a year, demonstrating our board’s willingness to embrace bold, new ideas with the potential to change the face of transportation in Southern Nevada and beyond.”

“Less than one year ago, this project was just an idea on paper; today, we’re ready to begin tunneling,” said The Boring Company President Steve Davis. “Thanks to our partners at the Las Vegas Convention and Visitors Authority for the opportunity to build our first commercial project here. We are excited about the future of Loop transportation in Las Vegas.”