by marc / Thursday, 23 May 2019 / Blog Category: Entertainment and Everything Vegas. 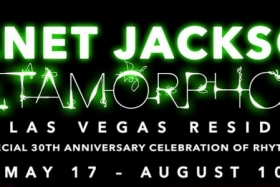 Janet Jackson is one of the most influential entertainers of the modern era. Her music has won her six Grammy Awards, two Emmy Nominations, a Golden Globe Award and a nomination for an Academy Award along with dozens of American Music Awards, MTV Video Music Awards and Billboard Music Awards.


To say Janet Jackson is popular is an understatement. She has record sales of over 160 million records worldwide. Miss Jackson stands as one of the best-selling artists of all time with a string of hits that have left an indelible impression on pop culture. Her music and artistry has opened doors through which other top artists have followed, many acknowledging her impact on their musical perceptions

Metamorphosis isn’t a show that you’ll see on tour anywhere around the country. The residency was designed exclusively for the Park Theater. Metamorphosis peels back the layers of Miss Jackson’s immensely private life. She shares her transformation from a young girl with issues of self-esteem to global Icon.

The centerpiece of this all-new thought-provoking show is Janet, herself. She captivates show-goers through their senses with electrifying visuals, explosive dance numbers, chart-topping hits, and fan favorite deep cuts.

Longtime fans will appreciate that Janet Jackson’s Metamorphosis show also features a special 30-year anniversary celebration of her ground-breaking album Rhythm Nation. Here’s a video of “Rhythm Nation” from a fan at the first show of the Metamorphosis residency.

Fans can follow Janet’s path to self-love, empowerment, motherhood, and activism, amidst the challenges faced along her personal journey. She encourages her audiences to find their own light within themselves through her Metamorphosis.

A limited number of tickets are available for the following performances:

Tickets for Metamorphosis start at $79. Visit MGM Resorts for more information on Janet Jackson’s Metamorphosis residency at the Park Theater inside Park MGM.

Janet Jackson is just one of the major artists performing a residency at the Park Theater inside Park MGM. The relatively new venue has a slew of artist residencies scheduled for 2019.