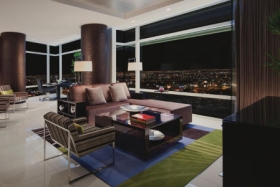 One of the most overlooked accommodations in Las Vegas is individual hotels within larger casino-resorts. These individual hotel towers are usually away from the action of the main casino and hotel but have easy access to the fun. These boutique hotels often have a different level of services and separate amenities.

Being away from the noise and crowds is important for some people but there might be a better reason to stay at these hotels inside of larger casino-resorts. Many of these hotels have larger rooms at the same price as regular rooms. These hotels may offer some of the best deals in Las Vegas.

Hotel In A Hotel

The hotel in a hotel concept isn’t new. In fact, the “newest” boutique hotel within another hotel in Las Vegas goes back five years. In 2014, Delano Las Vegas opened at Mandalay Bay in the tower that used to be called “The Hotel.”

Delano and most of the other hotels here are more than just a new name on an old tower. Each of these boutique hotels has its own restaurant(s), bar(s), pools, check-in/entrance, and staff. Let’s take a look at some highlights of each hotel in a hotel.

Earlier this year we looked at why Delano Las Vegas might be the hotel for you so I won’t rehash everything. Delano is a great option if you like the casino at Mandalay Bay but hate how busy it can get – especially when there’s a convention.

All of the rooms are suites that are often similarly priced as a normal Las Vegas hotel room. The separate space for everything provides a feeling of relaxation that might be lost in the hotel with 3,000+ rooms.

Elara at Planet Hollywood was originally built to be condominiums. Those plans changed after the economy crashed in the early 2000s. The building is operated as a Hilton hotel and timeshare that is separate from Caesars Entertainment and Planet Hollywood. Use Hilton Honors if you have rewards.

The rooms are all apartment-sized suites since this was intended for full-time residents. Elara is a separate hotel that connects to Planet Hollywood through a 30-second walk through the Miracle Mile Shops. Guests have a separate entrance and pool from Planet Hollywood but get to share a casino and mall.

Four Seasons was the first hotel within a hotel concept in Las Vegas. While the hotel is connected to Mandalay Bay there is a longish walk to the casino, convention center, etc. This distance makes it feel like you’re totally separated from everything even though you’re under the same roof.

While everything here is typical for the luxury hotel chain, there’s one not so secret bargain. The “Cut of The Week” deal at Charlie Palmer Steak is one of the best prix-fixe menu deals in Las Vegas. Each meal is currently $58 per person and includes a 3-course steak dinner and unlimited wine.

Signature at MGM Grand is a condo/hotel hybrid that is connected to the casino with a loooooong walkway. The all-suite hotel is secluded from the mayhem inside the massive MGM Grand casino. The walk to the casino and amenities at MGM Grand cannot be understated. It’s can be a selling point or a reason not to stay here.

There’s a separate entrance for Signature than MGM Grand. Most of the amenities are at MGM Grand but there is a lounge, restaurant, and Starbucks at Signature.

Nobu at Caesars Palace and the Aria Sky Suites are a similar but different hotel in a hotel concept. Both are considered to be a part of the casino but they’re treated differently. The service for both properties is top-notch. While the towers are a part of the respective casinos, there’s a noticeable difference in the quality of service. The staff for each is just a bit more hands on.