by marc / Thursday, 06 February 2020 / Blog Category: Everything Vegas and Gaming.

Having Fun While Gambling In Vegas 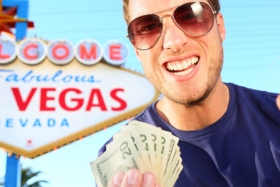 I found Las Vegas and the casino business because of gambling. My first time gambling was in grade school when I learned how to play poker. We played for pennies and had a great time. My poker playing days stayed on the east coast since I only gamble in casinos nowadays. I don’t enjoy casino poker. The appeal of the game was beating my friends and taking all of their money! Muahahaha.

I dabbled in sports betting while in high school but stopped when I saw what happened when people didn’t know their limits. Illegal gambling can get pretty ugly. Things changed when I turned 21 and could visit legal casinos. My first days of legal casino gambling took place in Atlantic City but some of the best times have happened in Las Vegas.

According to the Las Vegas Convention and Visitors Authority Visitors Profile, about ¾ of people visiting Las Vegas in 2018 (the new study should be out in a few months) still gamble when visiting Sin City. While Las Vegas has so much more to offer than just gambling, the vast majority like to play a few bucks when visiting the casinos.

Like many casino guests, I played blackjack when first starting to gamble. The game bores me and I play so much less often than ever. The only interesting story about blackjack I have to share is losing a lot of money and winning it all back – and then some – on a wild night in Atlantic City. I’ll save that for another day. Today, I’ll share some fun tales of gambling in Las Vegas.

Craps has intrigued me ever since my first visit to a casino. It took a few years and trips to Las Vegas to get up the nerve to play the game. I learned how to play craps at the Hard Rock one night after a bunch of vodka drinks gave me the courage to approach a table.

Everyone playing and dealing was very helpful and supportive. They taught me the basics. Everyone was rooting for each other to do well. The camaraderie was amazing! Craps tables are the same today.

I stuck to the passline with minimal odds so I could see how the game was played. An hour or two later I was hooked! Craps looks complicated but is simple as long as you stick to basic bets like the passline with odds and a couple of numbers.

Craps is still my favorite casino game but I play less often now because it’s a bit too much fun. Trips to casinos for me are much more mellow than they used to be and that’s totally fine.

I never played video poker or slot machines when I first started gambling. Those games were for old people I thought. Then I noticed my video poker playing friend was getting as many comps risking less money then I was for all of my table gameplay. I decided to add video poker to my gaming arsenal to get better comps. Many years later, I came to love video poker and I play it often.

My favorite video poker session happened when I first moved to Las Vegas. I was waiting to see a concert and playing a 50 cent video poker game at Red Rock Casino. Just before Lifehouse hit the stage, I hit my first royal flush for $2,000.

I’ve hit other royal flushes for various amounts since this experience but that made a fun night even more fun. That’s sort of what gambling has always been for me.

Red Rock Casino still plays Lifehouse every time I visit. They must know it still gives me the feels.

A couple of years ago, a friend and I sat down at a table shortly after checking into the Flamingo. We missed our dinner reservation because we won for hours on end. Some wins were big and some were small but the bankroll kept getting larger.

By the time we were done playing, Carlos and Charlie’s was the only restaurant still open for a full meal. Both of us left the tables up four figures and in just an amazing mood.

Mississippi Stud Poker is more often a quick loser than a big winner. However, the big wins are so much fun that we both keep playing it whenever she visits.

As I mentioned earlier, my gambling fun is much more mellow than it used to be. Pai Gow Poker has a lot to do with it. I write about Pai Gow Poker often because it’s the perfect game for 2020 Las Vegas. The game is slow, easy to learn, fun to play, has a low house edge, and low volatility.

The one thing lacking with Pai Gow Poker is the excitement found playing craps. As I get older, that’s less of a problem. Being able to have a few too many drinks while gambling and catching up with friends is more fun. The low volatility and house edge mean that buy-in will usually last longer.

In November, someone won the Caesars Pai Gow Poker progressive jackpot in Las Vegas for $2.3 million. In October a friend and I were chasing that jackpot when it was around $1.5 million. Neither of us won the progressive but had a blast trying. During one session I had four Aces and walked away up about $500.

Pai Gow Poker really isn’t a game with big wins like Mississippi Stud Poker. The wins typically are smaller but money almost always lasts a long time and that has its benefits.