Get more for your money at Gold Coast Las Vegas 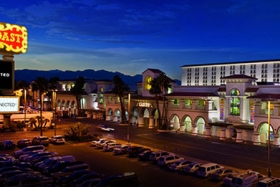 The Gold Coast is one of the casinos I spent a lot of time when I first started visiting Las Vegas. While the property has changed a lot over the years (RIP Cortez Room), the Gold Coast is relatively similar. It’s still an affordable casino-hotel that’s a great entry point to Las Vegas.

The Gold Coast isn’t the fanciest property in Las Vegas but it’s above average and has just about all the basics you need from a budget property. In a strange way, it might actually offer more than some casino-hotels that are considered a step up from the venerable Gold Coast.

I never left the Vegas Strip on my first few visits to Las Vegas. I was content with that version of Las Vegas until I started exploring casinos off the Strip. That’s when I was pointed to the Gold Coast. This was the first casino-hotel I ever stayed at away from the glitz and glam of Las Vegas Blvd.

The Gold Coast is about 1.5 miles away from Caesars Palace. For reference, the walk is about the same from the MGM Grand parking garage to the exit to the Vegas Strip. While you might not want to make that walk from the Gold Coast to the Vegas Strip at night, it’s a quick car ride (taxi, Uber, Lyft) to the action and rooms are often less expensive.

The difference in hotel room prices between the Gold Coast and Vegas Strip properties isn’t as drastic today but the savings remain.

Saving Money At The Gold Coast

The only times I’ve stayed at the Gold Coast were for bachelor parties. The inexpensive rooms, low gambling minimums, and cheap dining offered the kind of deal a large group couldn’t pass up. The Gold Coast still has a similar value. I’ll break it down for you:

Hotel rooms: These aren’t fancy rooms but they’re clean and affordable. Like other former Coast Casino hotels, they have a small window in the bathroom. This is big if sharing rooms for a bachelor party.

Dining: The Gold Coast is home to one of the best value restaurants inside of a Las Vegas casino – Ping Pang Pong. The food at the Chinese restaurant is both delicious and extremely affordable. The hot and sour soup at Ping Pang Pong might be the best hangover cure in Las Vegas. There are a variety of other restaurants including quick-serve shops like Subway and their coffee shop.

Gaming: To start the table game minimums are low. Low minimums are the beginning of the gaming value. The rules for all games are fair and better than most low rolling games on the Vegas Strip. The casino has a great selection of video poker and slot machines. The sportsbook has lots of seats and odds that reflect more locals wagering than tourists. Oh yeah, they have a Bingo hall that you won’t find on the Vegas Strip. Overall, the gambling at the Gold Coast is fantastic, especially for low rollers.

Other: Casinos for locals are often similar to malls with gambling. They offer a variety of amenities for the family in addition to casino games. The bowling alley at the Gold Coast has 70 lanes, an arcade, a snack bar, and traditional bar games. It’s a nice respite from the usual trips to Las Vegas.

I visit the Gold Coast a few times a year but only with people that have the same affection for the property. Every meal at Ping Pang Pong is still a hysterical group outing. Every Bingo session is ridiculous. There’s never a bad time at the Gold Coast.

I learned how to play Pai Gow Poker at the Gold Coast. It was an epic late-night vodka-fueled run that ended after sunrise. Even though the minimum bet was $5, a friend and I were gifted comps for the breakfast buffet. It was the perfect end to an amazing night of drinking and gambling. Through that haze, we both learned to play a game that has become my favorite to play in any casino in Las Vegas.

I can wax nostalgic about the Gold Coast forever but I think I’ll just wait until my friends visit in November so we can create some new memories. After all, that’s what visiting Las Vegas is all about (even when you live here).