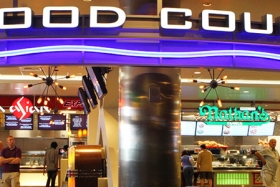 Casino food courts and quick serve restaurants can be a savior when visiting Las Vegas. Not only do these venues offer a variety of food but they’re often the least expensive dining option in and around a casino. Las Vegas food courts aren’t necessarily filled with fast food that’s sitting and waiting for you.

Today, you’ll find plenty of fast casual and quick-serve dining options in food courts all over the Las Vegas valley. This kind of restaurant is faster than a traditional sit-down restaurant but slower than the restaurant you’ll typically find with a drive through.

Eating at a food court or quick-serve restaurant comes in very handy in Las Vegas. Sin City has a mind of its own and takes us off track and setting firm times for meals doesn’t always work. We may need a meal but sometimes that meal just needs to be a quick bite. Not every meal needs to have water, drinks, appetizers, main course, and dessert.

The Fulton Street Food Hall at Harrah’s has a wide variety of dining options including salads, sandwiches, sushi, and pizza. You can have a fresh meal in just a few minutes and probably pay about 50-75% of a traditional sit-down casino cafe.

Many of the casinos on the Vegas Strip have been upscaling their traditional restaurants. Sometimes it isn’t possible to find lunch or dinner for under $15 unless you go to a food court. Caesars Palace is a good example of this.

It will cost at minimum $15 for a meal after tax and tip at most of their restaurants. The food court is always busy because of this. It’s easy to find something to eat for less than $15. Restaurants like Smashburger are making food fresh as you order. Your meal is not sitting around like fast food you may remember from food courts of yesteryear.

The Vegas Strip isn’t the only place to find food court bargains. I’m writing this article (as I often do) at the Red Rock Casino food court. Quick serve options here include Rubio’s fresh Mexican, Fatburger, Capriotti’s sandwiches, and Tropical Smoothie. A meal at most of these restaurants will cost around $10.

Food Courts On The Vegas Strip

One of the best secret quick-serve food courts on the Vegas Strip between two casinos. There is a small food court underneath the McDonald’s in between Harrah’s and Casino Royale. This little food court is home to Chipotle where you’ll usually find a meal for under $10. You’ll also find Panda Express and a pizza shop for some cheap eats but Chipotle is the winner.

It looks like word has gotten out about this hidden gem. I’m told there’s almost always a line out the door for this quick serve bargain. The last time I stayed at Harrah’s I had a meal from this food court almost every day. The coffee at McD’s was quick, the burrito bowl from Chipotle was filling, and the Orange Chicken from Panda was a tasty treat after a few too many drinks.

Food courts are more important than ever in Las Vegas. They come in handy whether you’re looking to save money or just don’t want to spend a lot of time in a restaurant. They can also make for a great local coffee shop if you’re looking for a place to work in Las Vegas.