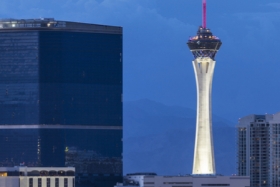 Drew Las Vegas is scheduled to open in 2022. There have been promises of a new north Vegas Strip for years. Unfortunately not much has changed since Sahara reopened as SLS Las Vegas in 2014. Progress on the area between Wynn and the Stratosphere has been off and on but mostly off.

Things could be changing on the north end of the Vegas Strip. There’s visible progress at Resorts World. Plans have evolved on the casino resort being built across the street from Wynn Las Vegas but construction continues on the hotel towers.

Resorts World is still scheduled to open in 2020 but there’s a lot of work to be done. It wouldn’t be a surprise if the opening is pushed back. The construction is moving at a snail’s pace. Additionally, Virgin Hotels Las Vegas and Circa are expected to have their grand openings in November and December of 2020, respectively.

Now there’s news on another casino resort that has been dormant for far too long.

The Drew and Drew Las Vegas

The big blue monstrosity of a building on the north end of the Vegas Strip was originally built to be Fontainebleau Las Vegas. Construction was about 90 percent complete when the owners ran out of money at the end of 2008. The company filed for bankruptcy in 2009 and the nearly complete property has stood vacant without any work for 10 years.

The building was purchased in late 2017 and renamed The Drew. Plans were in place for the property to open in 2020. Well, the opening date has been pushed back. In addition to a new name “Drew Las Vegas,” there’s now a plan for the property to open in the second quarter of 2022. The exact date hasn’t been revealed but if the plans go as scheduled The Drew will open in April, May, or June 2022.

Unlike previous plans, there’s now a company in charge of finishing Drew Las Vegas. Diller Scofidio + Renfro will the design architect for the integrated casino resort. A quick look at the DS+R website shows quite a beautiful design portfolio.

The New York company should bring a new vibe to Las Vegas. Plans for Drew Las Vegas initially included for a viaduct connecting Drew Las Vegas directly to the expanded Las Vegas Convention Center. Plans for both projects have changed since being introduced. It will be interesting to how DS+R will connect the two properties if that’s still happening.

“We believe Drew Las Vegas is set to usher in the next generation of Las Vegas resorts. It will be unlike anything on the Strip today – a truly integrated resort that brings together a unique take on Las Vegas and curated set of experiences from around the world,” says Steven Witkoff, Chairman and Chief Executive Officer for Witkoff.

He continued, “We are thrilled to be working with such a prestigious and visionary firm as Diller Scofidio + Renfro. Our organizations share a commitment to challenging convention by seeking out original, transformative outcomes.”

Drew Las Vegas has a hotel partner set already. Marriott has contributed 10 percent toward the construction costs. Not only will this be a Marriott hotel when opening but it will also be home to the only J.W. Marriott on the Vegas Strip.

“The Drew Las Vegas will become a landmark property for Marriott International,” said Tony Capuano, EVP, and Global Chief Development Officer, Marriott International. “The resort will give our more than 100 million loyalty members the chance to enjoy our brand of hospitality in one of the most exciting and popular cities in the world, whether the visit is for a convention or a leisure trip.”

You can read more about the partnership with Marriott and Drew Las Vegas here.