Celebrities Who Live in Las Vegas 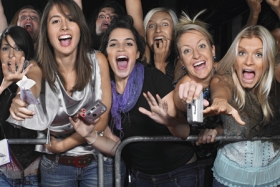 It’s not that hard to find famous people in Las Vegas: all you have to do is book a show. With some of music’s most legendary performers hitting the stage on any given night, it’s almost impossible to leave the city without seeing a star. But what about off the stage? Many famous people have made Las Vegas their home, either permanently or while working on an extended gig.

Here are some the celebrities you could possibly run into on the street, in restaurants, or while shopping. Keep an eye peeled, and don’t let the dark sunglasses fool you.

She may be a famous Canadian, but songstress Celine Dion made Vegas her home in 2002, buying a house with husband René Angélil during her hugely successful five-year engagement at Caesars Palace. Now she’s back at Caesars, and with a contract that was extended until 2019, Las Vegas will be her family’s home base for several more years.

The popular brother-and-sister duo have been doing their little bit country/little bit rock-and-roll show at the Flamingo since 2008, so it’s no wonder Donny Osmond has proclaimed that the city of Las Vegas “really is my second home.” The Osmonds are contracted through most of 2013, and may extend their stay.

Tennis great Andre Agassi was born and raised in Las Vegas before going on to win eight Grand Slams. He and his wife, a 22-time Grand Slam winner herself, live in Summerlin with their two children. Agassi opened a tuition-free charter school in his name for at-risk Vegas youth, and he and his wife are heavily involved in other local charity work.

Founding member of Public Enemy Flavor Flav lives in Las Vegas with his girlfriend Liz and her son. The hip-hopper-turned reality TV star flirted with the restaurant biz for a while, but unfortunately, Flavor Flav’s House of Flavor closed after only six months of selling fried chicken in Vegas’ East Side.

Motley Crue frontman Vince Neil doesn’t just live in Las Vegas: he’s become part of the local culture. Neil is the creator of the Off The Strip Poker Tournament, has launched his own brand of Tequila, and is now in the club business. The rest of the band will be joining him for a second residency at Hard Rock Hotel & Casino beginning in the Fall of 2013.

It should come as no surprise that the entertainer known as Mr. Las Vegas makes his home in the city that made him famous. Newton has performed in Vegas since 1958, and though he moved out of the sprawling Casa de Shenandoah ranch, his new digs are still befitting a star, with a pool, a spa, a main mansion, guest houses, and room for his exotic animals.

Jackson family patriarch Joe isn’t exactly the most-liked man in town, even if he did father one of the most talented show biz families of all time. That doesn’t stop Michael Jackson fans from flocking to his dad’s Vegas home to pay their respects to the King of Pop. Michael himself lived in Las Vegas in 2007 and 2008, taking his kids shopping at Caesars with guards in tow. Sister Janet still owns a home in the city, though it’s occupied by mom Katherine when she’s in town.

No, they don’t live together, but the popular comedy-magic duo each reside in Las Vegas, and they both have homes befitting their bizarre interests and personalities. Penn Jilette’s candy-colored custom compound has an architectural style reminiscent of Pee Wee’s Playhouse. Partner Teller (he legally changed his name to just “Teller”) owns a Vegas home only a magician could love, with hidden doors, screaming skeletons, and magic mirrors.

NFL quarterback Randall Cunningham may have played for the Eagles, the Cowboys, the Vikings, and the Ravens, but he’s called Las Vegas home since his college days at UNLV. Cunningham returned to finish his film degree after retiring from football, and is now highly involved in community groups in the city. He founded Remnant Ministries in Las Vegas after becoming an ordained Protestant minister.

Comedy icon Jerry Lewis has a long history with Las Vegas, including a back injury from falling off a piano at the Sands Hotel in 1965 that still troubles him today. He was onstage with longtime partner Dean Martin for the last time at Bally’s in 1989, shortly before Martin’s death, though the two had split up years before. Near 90, Lewis still sometimes manages live shows at the Orleans, not far from his Las Vegas home.

Magician Criss Angel’s luxurious mansion sits on three-and-a-half acres atop a mountain overlooking the Vegas Strip. The estate, named “Serenity,” was inspired by a Tuscan castle, and features priceless sculptures, fountains, and room to store his exotic car and motorcycle collection.

Actor Cage moved his family to Las Vegas to escape the Los Angeles paparazzi, and now lives what he says is a much simpler life. There’s no denying the city has always had an appeal for the actor, who won his Academy Award for Leaving Las Vegas, starred in Honeymoon in Vegas, and has had a lifelong fascination with Elvis.

Comedian Rita Rudner has been performing almost exclusively in Las Vegas since 2001, so it’s no wonder she and her husband now make their home there. While she used to spend time at her beach house when taking a brief break from headlining, the Dana Point, California home recently went up for sale, suggesting that Rudner is now a one-city woman.