by marc / Friday, 08 February 2019 / Blog Category: Entertainment and Everything Vegas. 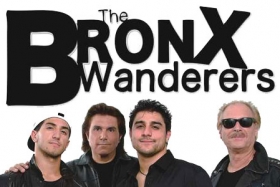 The Caesars Entertainment show shuffle continues with The Bronx Wanderers moving their show to the Mat Franco Theaters inside The Linq Hotel and Casino. However, the show shuffle may have ended at Paris Las Vegas where Jeff Civilico just signed an extension to perform through 2020.

If you haven’t been following, Xavier Mortimer left Planet Hollywood shortly after the debut of Criss Angel’s new show at the casino. Mortimer took his magic to Bally’s where he replaces Wayne Newton who is now performing at Cleopatra’s Barge inside Caesars Palace.

The Bronx Wanderers At Bally’s

The Bronx Wanderers have performed more than 800 shows for over 70,000 fans since opening at Bally’s more than two years ago. The father-and-son trio was voted the Bronze Winner of the “Best New Act/Show” by the Las Vegas Review-Journal’s Best of Las Vegas Awards 2017. Due to popular demand, they’re moving to a larger venue at The Linq.

While the scale of the production will be larger, the group will continue to provide their fans with an up close and personal shows that appear larger than life. Guests can still expect to hear hits from throughout the history of Rock & Roll. The Bronx Wanderers perform songs from Frankie Valli & The Four Seasons, Queen, Billy Joel, Bruno Mars, and more. The band will add some fun songs just for the new show at The LINQ.

“We have loved performing for our fans in Las Vegas for the past two years, and are so excited that we have this opportunity to play in a new, larger theater at The LINQ, which will allow us to take the show to a whole new level,” said the band and show’s founder, Vinny Adinolfi. “This isn’t just your parents’ Rock ‘N’ Roll. Audiences will leave the show singing and feeling like one of the famiglia. I am living my dream!”

“This is a one-of-a-kind show! The Bronx Wanderers provide the best musical time you will experience on one stage, or dare I say, ever!” added Kathi Glist, one of the show’s producers. “When 20 year olds in the crowd are jumping to their feet, clapping and yelling to hits from the ‘50s to present day, right alongside 70 year olds, you know this is one rockin’ show you’ll never forget.”

Jeff Civillico will continue performing his “Comedy in Action” show at Paris Las Vegas through 2020. Since 2012, Civillico has performed at The Linq and Flamingo before moving to Paris Las Vegas.

“Comedy in Action” has become one of the most popular all-ages shows on the Vegas Strip. The show blends physical comedy, stunts, and juggling with family-friendly audience interaction. Civillico juggles everything from bowling balls to chainsaws to fire. He’s also known for balancing a twelve-foot ladder on his chin and maneuvers a giant unicycle.

“Jeff’s energy and comedic prowess combined produce a show like no other,” said Damian Costa, vice president of entertainment operations at Caesars Entertainment. “We are grateful for our long-term relationship with Jeff, and look forward to two additional years of entertained guests at Paris Las Vegas.”