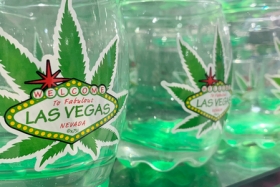 In 2017, it became legal to use recreational marijuana in Las Vegas. You can call it by its technical name “cannabis” or its most popular slang “weed.” You can call it whatever name floats your boat. However, you can’t buy or use it anywhere you want. We’ll dive into where you can buy and use legal marijuana in Las Vegas. Unfortunately, the laws are more restrictive than buying from any retail outlet and using anywhere you’d like.

The first step in enjoying legal marijuana in Las Vegas is buying it. The process is fairly simple but there are some things to know before making a purchase.

Retail locations: Marijuana may be purchased legally at a licensed dispensary. There are plenty of locations in Las Vegas but only one, Essence, has an address directly on the Vegas Strip. Weedmaps is a great resource to find a dispensary. There might be locations just off the Vegas Strip that might be closer to your hotel than Essence even if you’re staying in the tourist corridor.

Payment: Legal marijuana dispensaries in Las Vegas do not accept credit cards. You must pay for marijuana in cash. Many dispensaries have ATM’s on-site and/or accept debit cards. Debit cards usually have a surcharge of approximately 3%. Pro-tip: Many dispensaries offer a discount to locals. May friends with a Nevada resident and save a few bucks.

It’s only legal to consume marijuana in a private residence in the entire state of Nevada. Actually, there’s one other location you an enjoy marijuana in Las Vegas. You may also consume in a cannabis lounge. NuWu in downtown Las Vegas is the only marijuana tasting lounge open right now.

Just to be clear, you can legally buy marijuana at multiple locations in Las Vegas. However, you can only enjoy marijuana legally in a private residence.

Using marijuana is not legal inside of casino or hotel despite how often you might smell people smoking. Tourists can search for “420 friendly” airbnb rentals in order to find a private residence that will welcome those who want to smoke legal marijuana in Las Vegas.

I learned something interesting about marijuana purchases when I interviewed the previous owner of Essence Las Vegas in 2018. I was told that 80% of marijuana sold at Essence on the Vegas Strip is in edible form. Meanwhile, 80% of marijuana sold at the other off-strip locations is smokable. Anecdotally, this hasn’t changed since the interview. Weedmaps has a useful beginner’s guide to edible marijuana if you’re not familiar.