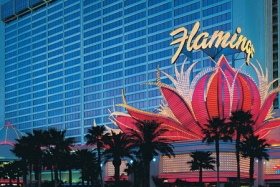 The Flamingo first opened on December 26, 1946, and is currently the oldest casino on the Las Vegas Strip. This legendary casino-resort is 70 years young! The Flamingo has changed a lot over the years and currently has a 77,000 square foot casino and 3,626 hotel rooms spread out over in two towers. This is one of the most popular casinos on the Las Vegas Strip because of its history, location, room prices, and more.


Being owned and operated by Caesars Entertainment only adds to Flamingo’s popularity by being part of the Total Rewards players club. This inclusion makes it easy for visitors from all over the country to access discounts and complimentary rooms. The Flamingo has been renovated in 1967, 1975, 1977, 1982, 1990, 1993, 2004, and most recently in 2009. However, you’ll often find small tweaks to the casino floor that make the property feel younger. I remember walking into the casino last year and all of the tables were rotated. It made sense for pedestrian traffic but was stunning at first.

Like most Las Vegas casinos, the Flamingo continues to evolve by holding onto what’s popular and adding new amenities with hopes they will become popular. X Burlesque, one of the most popular shows on the Las Vegas Strip, is celebrating its Diamond Anniversary in Las Vegas. That’s 15 years as the as one of the most popular topless revues in Las Vegas. The Flamingo will be rebranding the X Bar and Bugsy’s Showroom and will add some new photos of the burlesque dancing X Girls.

Caesars Entertainment is calling 2017 the “Summer of the Dragon” at the Flamingo. Due to popular demand Piff the Magic Dragon will extend his residency and make the Flamingo his home with more than 40 days of consecutive performances beginning May 22. You may know Piff and his sidekick Mr. Piffles from “America’s Got Talent” on NBC or “Vegas Nocturne” at Rose.Rabbit.Lie inside the Cosmopolitan.

The Flamingo is also stepping up the action this summer at the Go Pool. The weekend pool parties started a few years ago but it appears they finally have a steady flow of action for the summer of 2017.

The price is right for these daytime performances. Tickets for Flashback Friday and Day Beats Saturday shows are $10 for Flamingo hotel guests and $20 for non-hotel guests. The Go Pool will also have a couple Night Jams concerts. The first two concerts announced are Sugar Ray on Sunday, June 25 and Everclear on Sunday, July 16. Tickets for both concerts are $33.25. Visit gopoolvegas.com for more information on tickets, performances, and cabanas.

This just in… As we were posting this, Caesars Entertainment announced that they would begin a $90 million renovation of 1,270 rooms.

Don’t forget, the best rates for Flamingo can be found by clicking here.