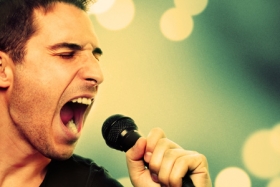 Karaoke is fun for all involved but it’s not something that’s available at most bars throughout the country. It’s especially difficult to find a place to get up on stage in Las Vegas. When you sing at a karaoke bar, you’re the star. Most people in the bar are watching you. This means that everyone in the bar isn’t buying a drink for those 4 to 5 minutes. It’s understandable why many bars wouldn’t want to cater to karaoke. They want to make every penny they can. That said, there are a few places in Las Vegas where you can take center stage and sing your face off. That may be good and that may be bad. Here are the best karaoke bars in Las Vegas.

The most popular karaoke bar in Las Vegas is Dino’s Lounge. Dino’s may look like a locals dive bar but it’s much more than that. Like with many dive bars there is a rich history at Dino’s. What’s important for today is that Dino’s is the most popular karaoke bar in Las Vegas. Dino’s has the cheap drinks and good times you should expect from a dive karaoke bar. Like with many of the awesome bars and restaurants in Las Vegas you won’t find Dino’s in a casino. However, Dino’s is located close to the action at 1516 S. Las Vegas Blvd. It’s on the Vegas strip just north of Sahara but you’ll probably want to take a cab here unless you’re staying at the Stratosphere.

Most karaoke in Las Vegas takes place away from the Vegas Strip hotels but on any given afternoon or evening (not night) you may hear loud off key voices coming from the Piano Bar at Harrah’s during their karaoke hours. The Piano Bar at Harrah’s is host to many different varieties of entertainment and you’ll find dueling pianos, Big Elvis and karaoke every evening between 6pm and 9pm. The dueling piano’s sitting is interesting but it never seems to lower the volume of people singing karaoke. The volume is jacked up so loud that onlookers in the casino and on the strip may hear you. There are gaming tables just outside of the bar so you’ll almost always have a few sets extra sets of ears listening to you that you’ll probably never see.

Champane’s Cafe looks like a locals bar but it also offers some of the best karaoke in Las Vegas. Champagne’s is located off the Vegas Strip and offers the cheap drinks that you’ll expect to find at a locals bar. Champagne’s is probably the most popular karaoke bar in Las Vegas behind Dino’s but its customers consist of more Las Vegas locals since it’s totally off the strip at 3557 Maryland Parkway. This is kind of what makes Champagne’s a hidden gem. What doesn’t make Champagne’s a gem may be the smoke. If you’re from a city that doesn’t allow smoking in bars prepare to lose your voice at Champagne’s because smoking is allowed and filtration here isn’t very good. That’s cool…just stick with the jams that lend themselves to a deeper voice.

There are other places to sing karaoke in Las Vegas but these three are the most accessible and best karaoke in Las Vegas. All are located near the Vegas Strip and Downtown Vegas where you’re probably visiting so walking or cabbing to Dino’s, Champagne’s or Harrah’s won’t take away much from your drink, tip or cab funds.