by marc / Wednesday, 01 March 2017 / Blog Category: Everything Vegas and Nightlife.

Where To Find the Best “Free” Drinks In Sin City 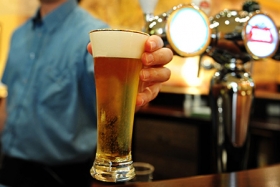 There are plenty of bars and lounges in Las Vegas that will make a delicious cocktail or pour a fantastic beer…if you pay for it. This is Las Vegas and you can get just about anything you want if you’re willing to pay. Big deal. Let’s get some free drinks!

You can still earn delicious cocktails, top shelf liquor and amazing beers complimentary at a few bars in Las Vegas. I’m not talking about a middle-shelf vodka and club soda or another complimentary domestic beer. You can still get an amazing cocktail or beer for no additional charge while you’re gambling at a few casinos bars.

There was a time where you could just sit at a video poker bar in a casino and drink all day and night on just a few dollars. That changed last year and some casinos have installed drink monitoring systems to make sure you’re spending money and earning a complimentary drink (you can see a comparison here).

Additionally, more bars are limiting the kind of drinks you can have complimentary. Many bars in Las Vegas will only offer a complimentary bottom or middle shelf liquor or domestic beer. Call me a snob, but I want the good stuff.

The complimentary cocktails when playing video poker is one reason that the Chandelier Bar is my favorite bar in Las Vegas. Sure, the Cosmopolitan has instituted a drink monitoring system at all of their video poker bars but you’ll still receive better drinks and service than most casino bars in Las Vegas. Unlike other video poker bars, you can receive fantastic signature cocktails ($16) and top shelf liquor (up to $15) complimentary while playing one of the machines. While other casino bars only offer a limited selection of spirits, almost everything at the bar is available here. You can receive similar treatment at the other bars at the Cosmopolitan, Bond and sports book, but neither match the atmosphere of this beautiful bar.

Tag is one of the best beer bars on the Vegas Strip with about 150 different beers to choose from. Many (many, many) of the craft and imported beer can be earned complimentary when playing video poker or one of the other games on the bartop machines. Caesars Entertainment owns The Linq and has a drink monitoring system so you’ll have to keep up your pace of play. Don’t worry if you slack off, the beers are affordably priced if you just want to pay.

This bar and restaurant at the Tuscany, just off the Vegas Strip, opened last year and quickly became one of my favorite beer bars in Las Vegas. The food is good and they have an immense beer selection. In addition to the 365 beers in their name, they have a unicorn list of very limited beer that you can purchase. The bar has video poker machines and offers complimentary beer while playing. Tuscany hasn’t installed a drink monitoring system. If you’re not familiar with the Tuscany, this small casino is about a 2-minute taxi, Uber or Lyft east of Bally’s or a 10-minute walk.