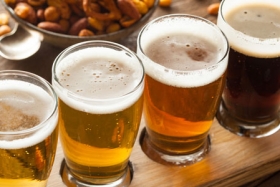 There has never been a better time to be a beer drinker in Las Vegas. When I moved here eight years ago it was almost impossible to find a good beer. Today, there are better beer options all over town. Many restaurants have added some kind of craft beer(s) or macro craft (owned by a large beer corporation) beer(s) to their menu.

There are plenty of local breweries creating unique beers too. My favorite addition to the beer scene in Las Vegas is the beer bars that focus on local and regional beers. You’ll find some good beer selections on the Vegas Strip but you’ll have to travel off the Strip to find some of the best beer bars in Las Vegas.


There are now plenty of great places to grab a beer or six in Las Vegas. Here are a few of my favorite bars to drink beer:

595 Craft and Kitchen is currently my favorite beer bar in Las Vegas. Sure, it’s close to home but they also have a wide variety of rotating taps, great food, excellent service, and sweet discounts on beer during Happy Hour. The fairly priced beers are discounted by $2 for locals and $1 for all other craft beer for a few hours a day.

The number of taps available might seem limited but the number of beers rotates often since they use smaller kegs for some of the selections. Unlike some other bars in Las Vegas, there’s no smoking so you can actually leave without smelling like an ashtray.

Aces and Ales has two locations with another opening later this year. I visit the Tenaya location since it’s closer to where I live. They have 50 rotating beers on tap as well as a good number of rare and vintage bottled beers. Since this is one of the most popular beer bars in Las Vegas the taps change quickly.

They a good number of the beers on tap as comps when you play video poker at the bar. That probably makes this the best option for video poker players who want to drink good beer. My favorite non-beer feature at this bar is that they play a lot of punk rock from the 1990s.

This is the oldest freestanding bar in Las Vegas and one of the best beer bars in downtown Las Vegas. Atomic Liquors is about a 10-minute walk from the Fremont Street Experience at 917 Fremont Street. They have a solid tap list with regional and local beer.

One of the fun features here are the special events that you don’t see at every beer bar. Even though it’s close to the touristy Fremont Street Experience, the vibe here is more relaxed with a good mix of locals.

Pub 365 is located inside the Tuscany casino just a few minute walk from the Vegas Strip. They have a massive beer menu for the public. They also have a secret “Unicorn” beer menu with limited and rare beers that you can peruse at the bar.

Pub 365 has the best craft beer options near the Vegas Strip. While they will comp beer when playing video poker, the selection is limited to mostly macro American beers or subsidiary “craft” beers. I prefer going here for a bite to eat and two or three tasty beers. They also have very good food at fair prices.